We were having a Turkish feast last month when Matthias mentioned it. "It's amazing, you know," he said enthusiastically, "that you can describe a complex emotion in a single word in German! There is no English equivalent sometimes."

Matthias was referring to the German word, Schadenfreude--which comes from: Schaden (harm) and Freude (joy). Here's the definition of schadenfreude according to the Merriam-Webster, 'enjoyment obtained from the troubles of others.'

My English friend, Josh and I (mostly Josh actually) tried to challenge Matthias by looking for an English word for schadenfreude. Some words did come close (jealous, envious, gloating), but we failed to find the equivalent. We settled. Matthias was right. Ivo, who also speaks German, joined the dinner later on and proved Matthias' point (that German is amazing) by adding some more words to the table.

Fast forward two weeks after my first introduction to the word, I was indulging myself in a book by Robert M. Sapolsky (his compelling TEDtalk brought me to it) when I encountered the word for the second time.


I immediately texted the group as we somewhat reminisced about it after Alain de Botton's tweet on Torschlusspanik a few days before. "Schadenfreude is following me..," I wrote. And I suddenly wondered, maybe there is Indonesian equivalent for schadenfreude. So I posted it on my InstaStories.

Some friends responded with, interestingly, the exact same comment. "Bersenang-senang di atas penderitaan orang lain," which literally means having a delight on the suffering of others. I think that's close enough. Though unlike German, apparently Indonesian has an idiom (of six words) to describe schadenfreude.

But then my friends and I argued, "don't we also use the idiom in a broader sense, like when we describe someone being ignorant of other's bad situation. Like, for instance, when a person inappropriately celebrates (or even brags about) something in front of a member of his/her family who at the moment is going through a hard time. So it's more like enjoyment 'despite of' (not really 'obtained from') the suffering of others. No?" (Anyone who knows Indonesian any better, do correct us if we're wrong.)

In the process of understanding the word better, my friends and I somehow assumed that there is probably a spectrum of schadenfreude, ranging from the passive kind on the left-end (being delightful just by seeing or hearing other's misfortune) to the active kind on the right-end (actually taking action to make the misfortune of others happen--a category where, we thought, a sociopath falls into).

We then ended the discussion by agreeing that, unlike bersenang-senang di atas penderitaan orang lain, schadenfreude is a whole new level of mean. I personally even thought that only horrible human beings ever experience schadenfreude.

About two weeks ago, I was having lunch with Yasmin--who has zero tolerance to spicy food. We talked about our best friend, Bunga who once pranked her to eat chili sauce by saying that it was tomato sauce. (I know right?! I cannot believe she bought that.) What happened next was that Yasmin started to scream for water, and Bunga (uhm, and I) laughed at her uncontrollably. We consider that as one of the most hilarious moments in our friendship history.

Now wait, was that schadenfreude? Were I and Bunga (especially lol) such horrible friends? I guess everyone who think so should have seen Yasmin's face. LOL. (Whoa, schadenfreude all over again...?!)

Come to think of it, I stand corrected. I believe everyone of us, without exception, experience schadenfreude--which is why all those prank shows (like Just For Laugh Gags, which Yasmin should be in, LOL) are so popular.

On a side note, I think it's fascinating how complicated our emotions are and how limited our (or maybe more correctly, my) understanding about them is.

Isn't it interesting to think--if not confusing--that we can have a feeling, such schadenfreude towards our loved ones? One emotion is complex enough already (with its spectrum, context, and else), and then we can have (another) emotion on top of (existing) emotion(s)--like having two emotions (or more) that seem to contradict one another at the exact same time--how to understand that? Say that every human being has layers of emotions, which one is permanent and the other is temporary, can we scale each of them the same way? How to distinguish them then?

On the other hand, if my understanding of what schadenfreude (as an emotion) is correct, maybe it is true that there is a range of emotions, and it is absolutely okay to experience each and every one of them (including schadenfreude itself). Maybe it is the dose/intensity (out of many other factors?) that determines whether or not it is healthy.

If I could offer you only one tip for the future, a clean sheet would be it. According to a poll by the US National Sleep Foundation (yes... 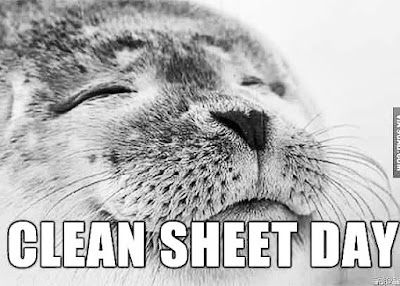